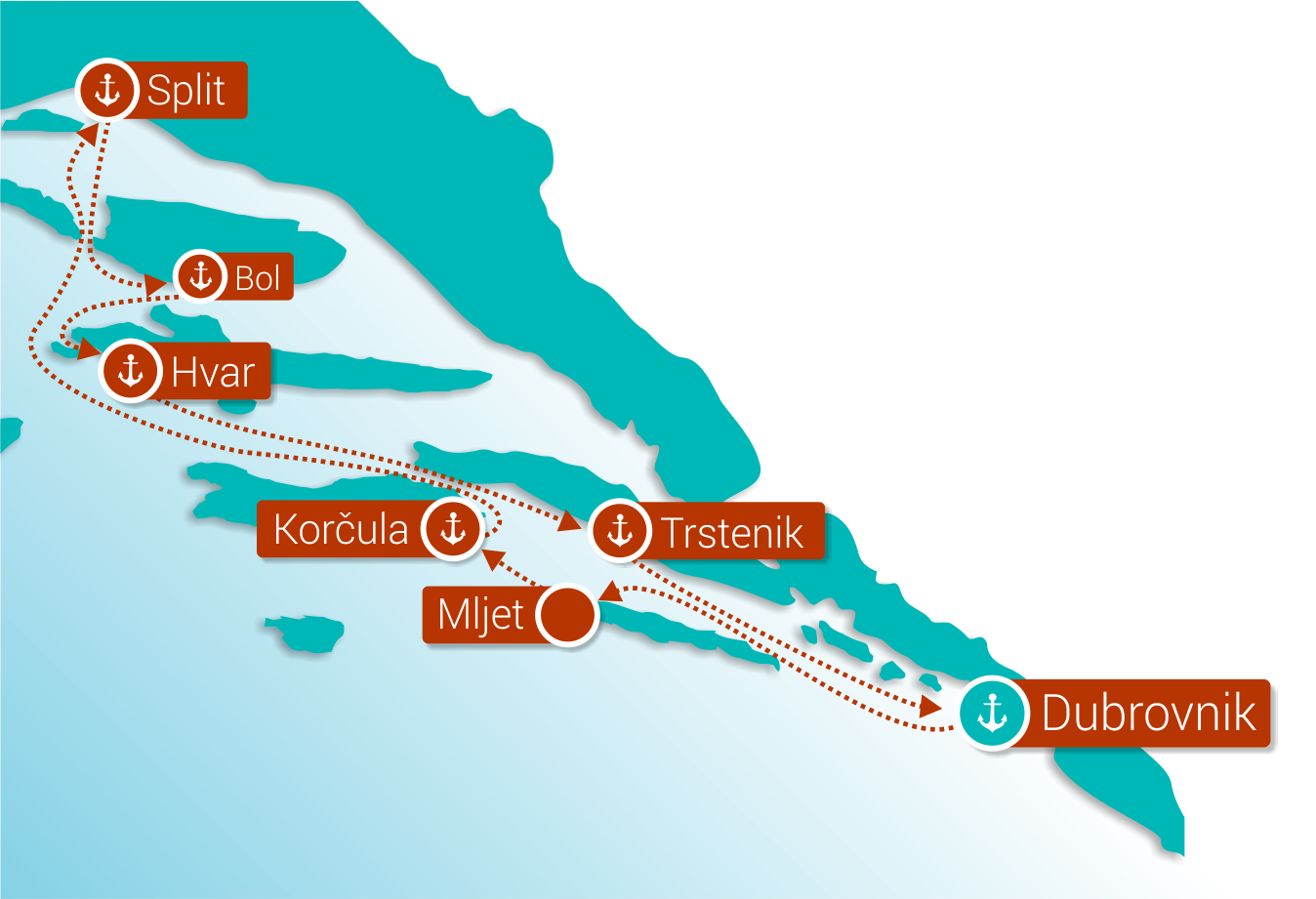 Transfer from Dubrovnik airport to Dubrovnik Gruž Harbour for check in from 14.00hrs onwards. After settling in, transfer to city gates for a guided tour of the city. The special charm of this ancient town are the buildings that have remained from the time of the old Dubrovnik Republic. Many of the monuments belong to the modest Renaissance architecture with some traces of Gothic style. Take the cable car from the Old Town to Srđ mountain to enjoy scenic views of the mighty ramparts and of the Elaphiti Islands. After the tour, return transfer to the ship for a welcome meet & greet cocktail reception on board. Overnight in Dubrovnik.

Next morning, we cruise a little further north to the Island of Mljet. The legend says Greek hero Odysseus spent years on this island when he was captured by the nymph Calypso. Join the cruise manager for a stroll to the famous salt lakes in the Mljet National Park and enjoy the boat ride to St Mary Isle to visit an ancient Benedictine monastery, an old abbey and a Church dating back to the 12th Century. Alternatively, you can rent kayaks, bicycles, scooters or convertible cars to roam around the National Park on your own, but beware of the nymphs! Next stop is Korčula, an island best known as the birthplace of Marco Polo, the famous explorer. Covering much of the island are the distinct, almost black pine forests so Korčula is also known as „the Black Island“. Korčula Town is like a mini Dubrovnik, as it also encased by medieval stone ramparts and towers.

We continue south to Split, Croatia’s second largest city where Roman Emperor Diocletian built himself a retirement palace now under UNESCO protection. Split waterfront is a happening place and there’s a buzz along the beautiful wide promenade. A local guide meets us on arrival for a walk through the heart of the bustling old town and the market. Overnight in Split.

Our next stop will be the Island of Brač and picturesque town of Bol. Walk along the promenade or swim at one of the most famous beaches in Dalmatia – Zlatni Rat (the Golden cape - known for its gravel promontory shifts from side to side as the wind and waves constantly change its shape). Bol is a typical fishermen’s town turned into a popular
tourist destination. After lunch on board time at leisure until afternoon wine tasting in the facilities of the oldest Dalmatia wine cooperative (dating 1903). Overnight in Bol. Captain`s dinner on board.

Morning departure towards Hvar. Lunch followed by a swim stop at the Pakleni Islands. Arrival to Hvar in the afternoon. Hvar is the longest Island in the Adriatic and one of the sunniest; known for lavish lavender fields and breathtaking beauty. One can find many historical landmarks in Hvar: the Renaissance cathedral with its original tower, and the oldest community theatre in Europe which was founded in 1612. Hike up to the town fort overlooking the harbour to get some lovely scenic views of your ship and the Pakleni islands. Overnight in Hvar.

Early morning departure towards the Pelješac peninsula, well known for its excellent wine. Arrival to Pelješac after lunch. Today we move away from the shore inland to explore the rural areas. Afternoon transfer to the village followed by a visit to a local farm you will indulge in a typical village party with Croatian delicacies, an all-inclusive dinner with local dishes made from their own produce. Late transfer back to the ship. Overnight on Pelješac peninsula.

There is no better way to catch first sight of famous Dubrovnik than from the sea as we return to our final destination – Dubrovnik. It is one of the few walled cities on the sea in the world. Writer George Bernard Shaw described it as “heaven on earth”. We cruise alongside the old city walls for a true perspective of the majesty of this place. Lunch is
served on deck before we head for Gruz harbour to dock. In your own time, why not walk those famous ramparts (all 1940 metres long!), or explore any of the museums in more detail, such as Sponza or Rectors, now is the time.

Breakfast and time to say goodbye to the crew and all your new friends! Check out by 9.00 am.